Things to do in the Barony of Sentinels’ Keep

In the Society, we love to kill our friends—not hurt them! There are many ways you can experience the thrill of battle, whether young or old. 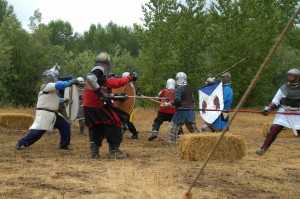 Heavy combat is an option that involves weapons of rattan, full suits of armor, and hitting really hard. While not for the weak of heart, this form of combat is how crowns are won. Heavy fighting is open to anyone ages 16 and up (with parental permission for minors). 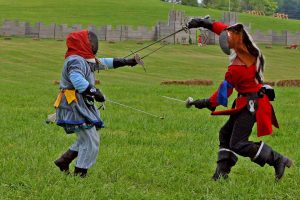 We also have rapier, which is similar to fencing (but more fun). This form of combat employs metal blade with rubber blunts (no sharp edges). Rapier is open to anyone ages 14 and up (with parental permission for minors). 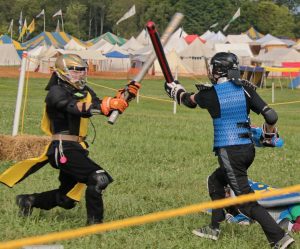 We have youth combat, using boffer (foam) swords and armor. This combat is broken into age groups for youth under the age of 16.

Current practice locations and dates can be found on our Facebook group, or by contacting the appropriate Marshal.

The SCA time period is between the fall of the Western Roman Empire – 476 to the end of the Tudors – 1603, and the area centers mostly on Eurasia (including the British Isles) and lands bordering the Mediterranean Sea.

The Minister of Arts and Sciences (MoAS) of the Barony of Sentinels’ Keep (BSK) helps foster the study of The Middle Ages and the research and methods for producing historically based clothing, artifacts, and performances. The Arts and Sciences (A&S) is the study of how everything people needed to live, work, and play during that time was grown, created, or performed.

As with all the other aspects of the SCA, we learn by doing and by sharing.

We also like to kill our friends from a distance!

Whether you are a fan of longbows, recurve bows, or crossbows, come and join the Barony of Sentinels’ Keep for some archery practice.  Then take your skills to the battlefield and try your hand a combat archery.

Do you like throwing spears?  What about knives?  Ever tried throwing axes?  Come and check out the Thrown Weapons activites within the Barony.

Other Ways to Play in the SCA 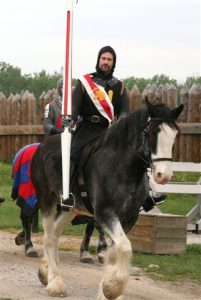 Bring your four-legged friends for some fun, recreational or combat.  The Barony of Sentinels’ Keep is just starting up their equestrian activites. 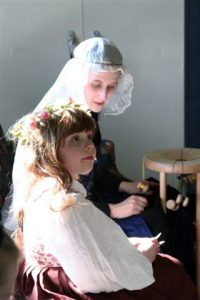 The SCA has activites for boys and girls of all ages. 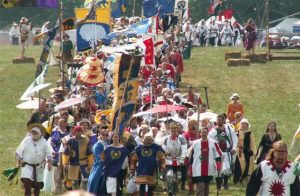 Join us for an Event.  Indoors, outdoors, large and small.  The members of the SCA love to get together to play!

There is nothing quite like a weekend spent with your friends, under the stars, living in the current Middle Ages. 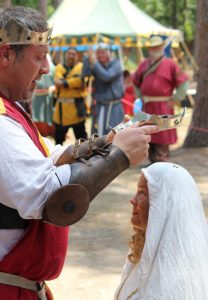 There are numerous awards in the SCA, at many different levels. This is meant as a guide not only to our local awards, but to other awards you might see in Artemisia. This list also includes the abbreviations used on other pages when referencing populace (for example: someone with an OL after their name would be a member of the Order of the Laurel). Our Barony’s local awards are featured first, then the list continues in order of precedence (Society, Kingdom, Principality (from when Artemisia was not its own Kingdom yet), and Baronial (other than local).

Remember, if you think someone is missing an award, recommend them! For Baronial awards, talk to the Baron or Baroness, write a letter, and make sure the intended recipient does not already have the prospective award. For Kingdom and Society level awards, talk to Their Royal Majesties, their heirs, and other members of the prospective order. Awards can’t be awarded if nobody knows the wonderful work your friends are doing!

Recommend a Baronial Award by emailing Their Excellencies at:   excellencies@sentinels-keep.org

Recommend a Kingdom Award by emailing Their Majesties at:  crown@artemisia.sca.org

Search through all Local and Kingdom Awards on the Kingdom website using their searchable database.  Awards are listed by person or by award.